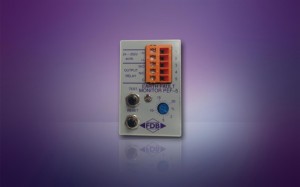 We found that zero sequence C.T.’s can be costly and difficult to install, particularly in retro-fit applications, whilst traditional types of spill current earth fault protective devices have the disadvantage of being somewhat crude in accuracy.

Therefore the PEF-5 was developed to provide an optimum solution and can be set to detect leakage currents as low as 2% of load current simply by utilising the existing protection or instrument C.T.’s.

We believe that in 98% of applications the C.T.’s used have 5 Amps secondaries and so the PEF-5 is designed to monitor the secondary current accordingly. On a 100.5 C.T. installation the PEF-5 can detect as low as 2 Amps of earth fault current which, in industrial applications, provides the capability of accurate earth leakage detection as well as earth fault protection.

However, in the event of a short circuit to earth where continuity has deteriorated due to terminal corrosion or a loose connection, then a short to earth becomes current limited and will not “blow” the upstream fuse fast enough to prevent the contactor opening under high overcurrent trip. This can result in destruction of the contactor or at least damage to a phase contact.

In the latter case, a major problem could occur in a motor installation since current imbalance on one phase (whether or not due to an earth fault) is a linear factor of current rise and therefore measurable. However, if a contactor phase contact has been damaged due to the condition described above, then a volt drop across that contact will occur, giving rise to a voltage imbalance to the motor. Typically, for every 1% of voltage imbalance on a 3 phase motor, the effective internal current increase (not externally measurable) will be approximately 8 times as high. Thus a 3% or 4% volt drop across any phase contact can result in the total burn-out of the motor connecting to that contactor.

The PEF-5 percentage earth fault unit can be used to provide early warning of fault current as low as 2% of load current or can be set to take a motor off line immediately a dangerous earth fault occurs, thus dealing with these potential problems.

Our Online store offers ex-stock delivery for food/medical and vandal related applications as well as general purpose situations - or contact our experienced team for information about our extended ranges and services including Rocfast assembly/logistics http://ow.ly/rcNe30rwdei

Find out about our bridge and grab handles for drawers and doors at http://www.fdbnews.co.uk/bridge-and-grab-handles-for-drawers-and-doors/ http://ow.ly/ZLOK30rwdeg

Within our range of panel mounting items including RCDs, Earth Continuity Monitors and special purpose electrical protection devices we have a selection of Velem and Emguard Earth Line Monitors for panel mounting as part of specialist safety systems http://www.fdbnews.co.uk/panel-mounting-components-earth-line-monitors/

Our Online store offers ex-stock delivery for food/medical and vandal related applications as well as for general purpose situations where stainless steel is indicated. More info at http://www.fdbnews.co.uk/full-program-of-stainless-steel-enclosure-hardware/ http://ow.ly/ssqF30rwdee